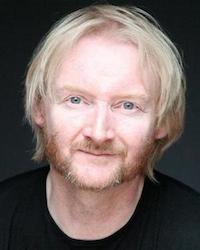 John appears in the new feature Apostle, directed by Gareth Evans and produced by Ed Talfan for XYZ Films and Severn Screen.

From the writer-director of The Raid and The Raid II, Apostle is set in 1905, on a remote British island. The story centres on Thomas Richardson (Dan Stevens), as he hunts for his sister who has been abducted by a dark religious cult.

John also appears alongside Michael Sheen and Lucy Boynton. Apostle will be released on Netflix on 12th October 2018.