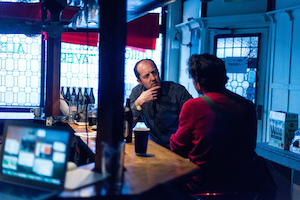 Operation Black Antler is an immersive theatre piece that invites you to enter the murky world of undercover surveillance and question the morality of state-sanctioned spying.

In Operation Black Antler you are given a new identity as part of a small team; you are briefed and then sent into an undercover operation. You must meet, build empathy with and ultimately try to win the trust of someone whose political and moral views may be the polar opposite of our own. What will you do when the power is in your hands?