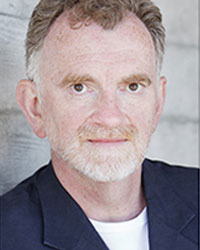 He appears alongside Maxine Peak and Rory Kinnear in this historial drama for Film4 and Amazon Studios.