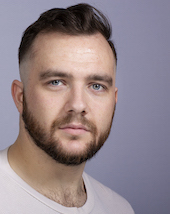 George Whitty makes his professional debut in Hello Again at The Union Theatre as The Writer.

The musical explores the fine line between love and lust through a series of love affairs & sexual encounters among ten characters placed over the 10 decades of the 20th century. Times may have changed but has the nature of love?

LaChiusa’s adaptation follows the structure of Schnitzler's original material closely and his score includes a variety of musical style and pastiche ranging from opera to 1970s disco.

"For an evocation of that spirit, for an interpretation of John Michael LaChiusa’s work that shows exactly how majestic his work can be in the right hands, the Union have a created a winner" - The Reviews Hub ★★★★

The Union Theatre has, not for the first time, unearthed a gem of a show and brought it back to life for London audiences to enjoy - Broadway World ★★★★