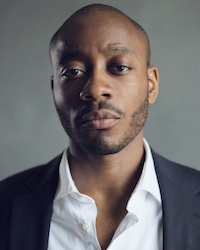 Django is a highly ambitious production set to deliver a contemporary and psychological twist on the Western genre through an engaging narrative and an accurate representation of the period. The cast includes Nicholas Pinnock, Noomi Rapace, and Matthias Schoenaerts as Django.

Set in the Wild West during the 1860s – 1870s. Sarah and John have founded New Babylon, a city of outcasts, full of men and women of all backgrounds, races, and creeds, that welcomes everyone with open arms. Haunted by the murder of his family eight years earlier, Django is still looking for his daughter, believing she may have survived. He is shocked to find her in New Babylon, about to marry John. But Sarah, now a grown woman, wants Django to leave, as she fears he will put New Babylon in jeopardy if he stays. However, Django, believing the city is in danger, is adamant that he will not lose his daughter twice.

Eric will play the role of Philip, one of John Ellis's (Nicholas Pinnock) three sons.